Also, I'm tired of spam and DNS attacks and all that. I'm resurrecting my blogger blog at www.kellyswails.blogspot.com. I also blog with my writing group at allwritesreserved.wordpress.com. Livejournal's had a good run, but you know. Google is my master now.

We had to put our kitty Morgan down this morning. Aortic embolism.

He loved to eat lettuce and strawberry tops. He liked to take the occasional shower. He was mercurial--purring one second, hissing the next. He loved to perch on shoulders and jump on backs.


Even with the other kitties around, the house feels empty. 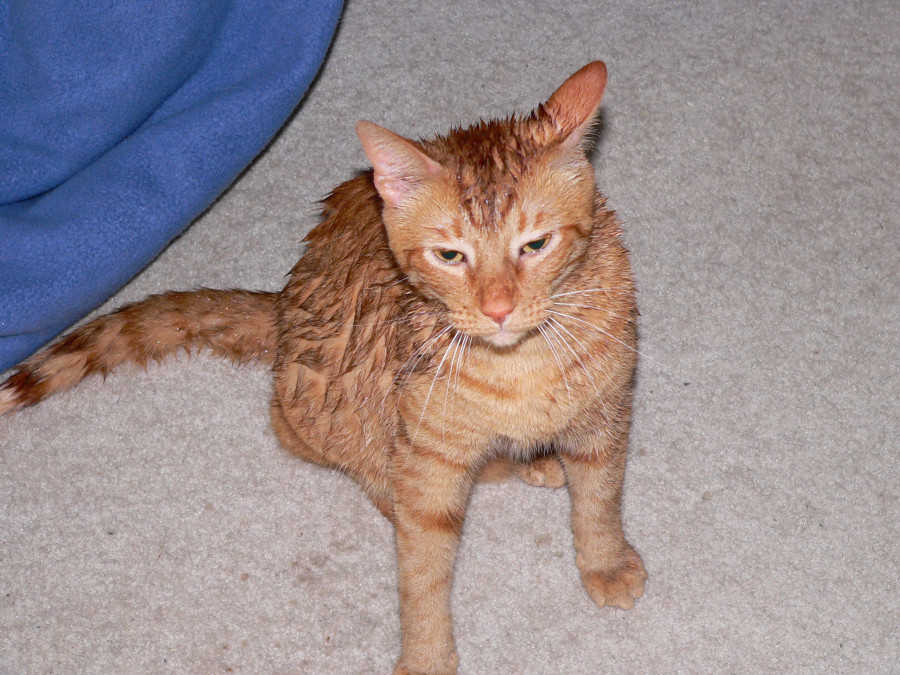 So the past few months have been ... insane. I quit my job to take another in Chicago. Which is almost three hours away from where I live. Yes, this will necessitate a relocation. We're putting our house on the market in the spring. In the meantime I'll get an apartment. In the mean-meantime, I'm staying with a friend three or four nights a week. I'm making new friends and staying in contact with old ones. I don't see my husband very much. My cats miss me (I think. It's hard to tell with cats). My guitar-playing has screeched to a halt. For a while there my writing took a hit.

It's rough living in one city and working in another.

I'm settling into something like a routine, even though that routine is convoluted and strange. I'm glad I took the job--it's a great blend of my Med Tech background and my writing background for one thing, and I'm having a lot of great experiences for another--but oof. Now that I've got a bit of structure, the writing is coming back. I'm *this close* to finishing the WIP. I've got three stories and an essay to write by the end of the year, and I'm confident that will happen. I'm leading the Library at Origins Game Fair this year, and things are falling into place with that.

Anyway, that's what's been up with me. How's your life?

Remember when you were a kid and you were counting down the days and the hours and the minutes to Christmas or your birthday or that Big Thing That You Couldn't Wait to Do, and you were sure that time was slowing down just to spite you, and couldn't it get here already, and your folks said "just wait. Time moves faster the older you get." And you thought they were full of shit? Or at the very least part of a vast conspiracy to make your life miserable?

Holy shit, were they right. Time moves faster now, physics be damned. HOW IS IT ALMOST JULY ALREADY? And the rest of the summer is going to fly by, too. I've got tons of reading to do for a workshop (on top of the usual writing group crits), guitar to play, Christmas gifts to knit, and oh-yeah-by-the-way, friends and family to see. I'm grateful my life is so full--and fulfilling!--but damn. In the words of Ferris, life moves pretty fast. If you don't stop to look around once in a while, you could miss it.

How do you guys stop and smell the proverbial roses?

So I'm a member of the All Rights Reserved writing group (what, never heard of them? That's okay: we're a quiet bunch) here in East Central Illinois. We've decided to start a group blog, which you can find here. We've made a schedule and everything, so the blog will have new content most days (unlike this one, which has spiderwebs and a creepy mound of unidentified fuzz in the corner). Add us to your google reader! Comment! Make us feel we're not shouting into an empty room (or a crowded one that is ignoring us)!

These are the 5 things I'd like to try as a writer.

4. Complete a short story a week for one year.

This coming week I'm going to be at the Origins Game Fair in Columbus, OH. Here's my schedule if you're in the environs and want to stalk me  say hi!

4:00—The Fine Art of Schmoozing

So! I'm blowing the dust off the blog to say a few things.

1. I blog sooooo much less since I started using twitter. But then you already knew that.

2. I've watched Avengers and The Cabin in the Woods. It's official: Whedon is my master now.

3. I've finished the first draft of the WIP. Goal: finish the second draft by mid-July.

Huh. When I say a book is "like" something else I usually compare them to movies or TV shows, not other books. Interesting.

Still hard at work on the World Domination novel, tentatively titled THIS WILL GO ON YOUR PERMANENT RECORD. I had a bit of a slog in the middle--middles are especially hard for me, probably because I'm a pantser and not an outliner--but now I'm on the downhill slide. maybe 15k or so more to go and I'll have a working first draft. So, say, in the next few weeks. That will mean I've written this draft in 4-1/2 months, which is blazingly fast for me. Most of my first drafts have taken anywhere from 8 to 12 months. After it's finished I'll take a few weeks off and refill the tank by catching up on reading. And then! The real fun begins: rewriting! \m/ (That's not sarcasm. Rewriting is the best.) I'm really looking forward to May and June. :)

Net Impact by Don Bingle is a fast-paced spy thriller with a geeky twist. Dick Thornby is a spy for the Subsidiary, a secret multi-national agency whose mission is to stop worldwide threats to humanity. Dick's been with the Subsidiary for years, and as a result his marriage has crumbled, his son is a stranger, and he can destroy the Dunedin port without blinking an eye. When he stumbles upon a massive conspiracy that includes the Chinese government, an underground facility, and an online game called Reality 2 Be, he knows he has to be on top of his game to save everything he holds dear.

Net Impact is like the movies True Lies and Mission Impossible meets Ready Player One with a dash of Vince Flynn's books thrown in for seasoning. While it does start off a bit slow--we're given a lot of information at the beginning--once the action starts it rocks and rolls until the end. There's death, mayhem, humor, technology, gaming, and intrigue all rolled up into one satisfying read. If you're looking for something to keep you up late on Wednesday night, Bingle's book should do the trick.